I consider Coca-Cola to be one of the biggest if not the biggest company, not only in the Philippines, but also, around the world. Coca-Cola Philippines has been existing for 27 years now, and I think that the Coca-Cola Zero product launch (correct me if I'm wrong, since I've only been in this planet for 20 years now) is the grandest ever.

Coca-Cola Zero® has been one of the most successful product launches in our history. In 2007, we sold nearly 450 million cases globally. Put into perspective, that’s roughly the same size as our total business in the Philippines, one of our top 15 markets. As of first quarter 2008, Coca-Cola Zero is available in 81 countries. - http://www.thecoca-colacompany.com/brands/index.html 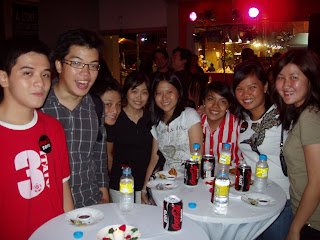 Yesterday bloggers, including myself and a lot of my friends and plurk-adas, were treated to a party at Taste Asia in Mall of Asia, Pasay. We had a "buffet-type" dinner by Taste Asia (of course) It was all delicious. We had a lot of games. Coke Zero-all you can! Free flowing drinks (alcoholic and non-alcoholic alike).

The Banana Dance, an emoticon in Plurk, was demonstrated and performed by my brother! Since he is really a dancer in real life, I kinda pushed him to demonstrate it to the public. Now, I think he's regretting that he did it (with lots of cameras/video cameras around he made his own "scandal") Woot! (If you want to see what I mean, refer to the video below - courtesy of Jeric). 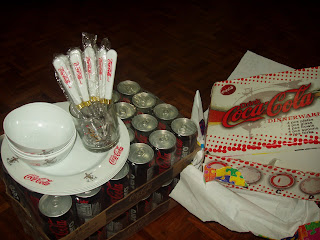 I was one of the lucky people who got the Coke Collectibles! I'm really happy that Jeric chose me. I really LOVE Coke. Even though I don't drink that much, and that I can say that I'm not an addict, I am addicted to or really into collecting Coca-Cola items, most especially cans and bottles from around the world.

Each registered blogger brought home a case of Coke Zero after!

I was with Ainna, Don, Tiff, Thea, Charles, Stephen, Blanch, Via and Jason, the Banana Dancer. More pictures of the event can be viewed in my Multiply site.
written by Bong at 7:08 PM