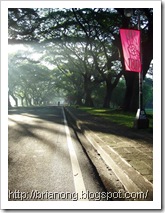 Last June 18, 2008 marked the 100th Birthday of the University of the Philippines. Celebrations were supposed to start 05:30 a.m., with the Photo-Op of the 100 Oblation poses; but unfortunately, it was canceled due to reasons unspecified. Instead, it officially started 08:00am at the Oblation Plaza, where every department, college and student were represented. 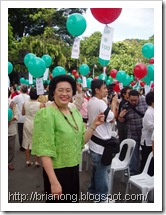 After everyone arrived at the Oblation Plaza, we started with the singing of the national anthem, L Right after the national anthem, we sang the U.P. Naming Mahal (U.P. school song), which followed by the singing of Happy Birthday U.P. (to the tune of "Happy Birthday to You") after. 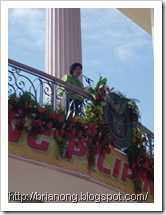 President Emerlinda Roman gave a speech after, on the balcony of the Quezon Hall. Being on top of everyone and commanding everyone's attention is the most amazing way to deliver a speech, really. Nearing the end of her speech, she pulled off a "text" joke, saying that the text message/ announcement coming from the higher ups was late/ just arrived. Everyone was shouting and really ecstatic at that moment.

She later announced that as per approval of the Department of Budget and Management and signed by President Gloria Macapagal Arroyo, the centennial bonus of 20,000 pesos will be released to the UP workers. She instructed all accounting offices to process the pay already. Everyone was jumping, very happy with that news. 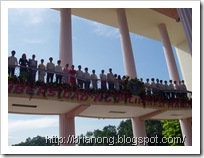 After the speech, the newly elected officials of the University Student Council were sworn into office.

After that, President Emerlinda Roman, and other U.P. officials led the launch and the unveiling of the new U.P. Centennial Stamps. Almost everyone was holding red/maroon and green balloons for the synchronized release of the balloons at the end of the event at the Oblation Plaza. The emcee counted from 1 to 20. After he said 20, everyone bid goodbye (and of course, wished for good fortune and a good year also) and released their balloons to the skies.

I bought a set of the U.P. stamps for my collection (watch out for the centennial stamps post later). Everyone headed to Vinzons Hall for some food and refreshments, and the launch of the Vinzons Hall, as a more student-centric establishment. 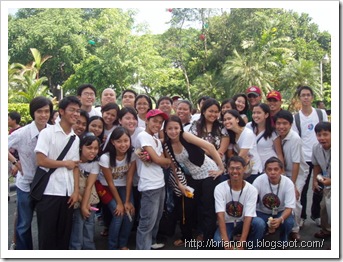 UP National College of Public Administration and Governance